The Serbian singer / pianist Jelena Dobric founded the band Persona together with guitarist Melik Melek Khelifa in 2012. However not somewhere in Europe but in the North African country of Tunisia. The singer has been living in La Marsa, a northern suburb of the capital Tunis since 2011. Previously, she studied music in Belgrade, played in the prog-metal band „Inumbro“ and sang in the female choir „Collegium Musicum“. The other band members previously played in several local Tunisian bands. In February 2016, the band published the debut album „Elusive Reflections“ in self-directing. Eighteen months later is with “Metamorphosis“ the second album available. 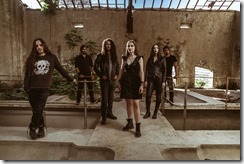 Whoever is awaiting ethno-Metal like Orphaned Land will soon be put right. Already at „Prologue (The Initiation)“ the band will go off after a short piano intro. Classic metal bangs out of the speakers. Jelena Dobric shows all her vocal abilities, she constantly alternates between clean vocals and evil growls. The songs are very melodic, sometimes quiet, sometimes fast forward. The Melody and rhythm changes require concentrated listening, e.g. in „The Omen Of Downfall“. Filigree guitar solos complete the songs. The keyboards are often melodic and underline the Prog-orientation of the album. 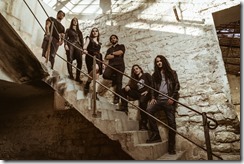 The „Armor Of Thorns“ is used here as an example. And „Invidia“ sounds contemporary and almost straightforward.

With „Metamorphosis“ Jelena Dobric and her bandmates succeeded a good second album. Compositions and arrangements are complex. Catchy melody leads alternate with bulky Prog elements. The clean vocals are mostly in the pleasant-sounding middle pitch range, the evil growls are discreet and song serve woven. The musicians on the instruments can always show their skills, whether with guitar solos, pronounced keyboard passages, the powerful bass or pushing drumming. The listener is forced to concentrate on the music, but can then discover new musical aspects at each further cycle. The album appeals to fans of different styles with its variety.