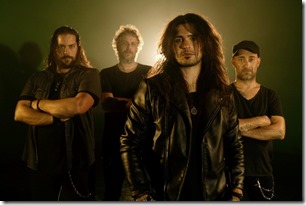 Italian Alternative Metallers BAD AS are set to release their new album “Crucified Society“ on March 17th via Sliptrick Records. Furthermore the band has unveiled the track-by-track by the lead vocalist Mattia Martin and the album coverart. Pre-orders are already available. Read below the label’s announcement:

Here’s what the band had to say about the release:

“We have tried to produce something new in our ears and, we hope, numerous listeners. The genre of the band has had some changes compared to past albums. The band started their musical career inspired by the trash metal with names like Metallica and Megadeth, passing through more melodic and alternative genres such as Alter Bridge and Disturbed and mixing it all with something more sparkling like the Whitesnake and Queensryche. With this album we are trying to move forward with a step that we hope is worth being recognized and listened to. During the production a lot of things happened inside the band, both good and bad personal things for everyone. So many of our reflections have been expressed and we fully see ourselves within these passages. We are happy with our songs and whether emotional or pissed, we write about everything we live and feel around us.

Metal is an iconically strong genre, but to write it you don’t just have to be angry, on the contrary, personally I think we have to “survive” a little or suffer and then take out something really powerful in the music! Music is not formed only by musicians and genres, but from personal lives, happy and sad occasions, this is what gives it it’s real merit.

The cover depicts a future society that we can define as cyberpunk, those who show off do it big! And as you can see from the image itself, the people underneath the cross don’t try to save the crucifix, but cover it with videos and photos to be used to get noticed .. also to say “but look at that kind of jerk” but the concept final is visibility. It fully epitomizes what the song that gives the title to the album says.”

Crucified Society: It speaks of a society now compromised by the world of social networks. Where the population is the victim of a System, in which fame is the only way to be recognized and collecting “likes”, and therefore the esteem of others. The world collapses under this lifestyle and, not realizing it, people end up making absurd gestures to be hated and loved, aspired and envied, advancing in the rank of society with the sole purpose of image. Dignity is less and less and nothing personal and innovative is created, self-destructing. As the name of the song itself says, the “Society of the Crucifixes” is where everyone tries to find the best way to appear, ending all martyrs of themselves.

Endless Race: The song only speaks of a love affair that ended badly. Where the partner, still in love, ends up in desperation and time. (I was inspired by Deep Purple’s Speed King)

Free Falling: The track speaks of the fall of nature, of pollution. What could happen by continuing to fight against our ecosystem that could collapse on ourselves.

Divided: We always talk about society, where the image of a person is everything, but generally neglects his own inner being. Time passes and it takes very little to notice the reality and the falsity of this type of person. Time unites and divides.

Mind Kind: It is a reference to heaven vs hell. Where Lucifer is not always taken for evil. Giving a little glory to those looking for reasons and knowledge.

Freedom: A song for those who suffer and are caught by moments of life where they can no longer communicate. A kind of encouragement to live life in a very bad way.

Final Night: In short words? A sorcerer pissed off with those who tried to kill him. The wheel turns for everyone, when you notice your mistakes sometimes you have only one chance to recover.

Believe: Let’s start to think again about humanity. Personally, I am not a philanthropist, but I seriously hope that someone can improve their lives and that of others with a little justice and just thought.

Truth: A reflexive song with a funny nuance. He talks about his dreams and his ambitions that lead to “risk” in life to get to a next step. But the truth is that only those who are truly worthy and courageous can get there. Having to deal first with the three famous monkeys, here deified, I do not hear, I do not see or speak. One of the five songs written by Alberto that I personally love.

Blackened Tornado: And here we are at the last portion of the album. This last passage describes a moment of depression, insecurity when the only thing you see in your life is the end. The absence or loss of something on which you have bet too much or too little can lead to an emotional discomfort not easy to deal with. I’m not a psychologist but surely during the composition of this album I found myself, I lived it personally, so I tried to faithfully reinterpret this wonderful piece, written by Alberto, in the best possible way.