At a time of slowing down and enjoying the festive spirits, the crew here at Sliptrick Records like to go the other way and head full on into the abyss. Someone famous once said “there’s no sleep in rock ‘n’ roll” …I can’t remember who that was but maybe that’s the point. With that in mind, we’re happy to announce 3 more new bands this week, all releasing early next year. 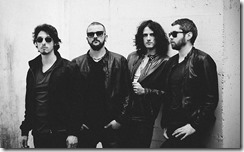 Four-piece rock blues band Sons of Revolution, were formed in 2013, in the central Italy. Initially the idea was to revive traditional blues with a modern sound and rock attitude. Over time, the band have added different colours to their style and their first self-titled album Sons of Revolution reflects all the band’s influences such as Jack White, Gary Clark jr, Led Zeppelin and Soundgarden. It’s a genuine piece of rock, played and recorded live with very few overdubs.

Sons of Revolution will be available on February 1st (edit: moved to the 15th), 2017 on Sliptrick Records. Stay tuned!

From The Dust Returned

Hailing from Rome, Italy, From The Dust Returned are a progressive rock/metal band born in 2015. Their debut EP Homecoming contains a combination of elements such as heavy metal, hard rock, progressive and psychedelic music seeping through the six songs that hark back to 70’s sounds using dark atmospheres and acoustic melodies. The EP’s focus is on the opposite duality represented by two opposing kind of voices – acoustic guitars against distorted ones with a constant changes of atmospheres.

Look out for Homecoming’s release in early 2017 on Sliptrick Records.

Tonight We Stand are a 5-piece melodic-metalcore act from Venice, Italy. Each member of the band comes from different music influences which has culminated into a specific sound suited to the band using a blend of the familar mixed with a large doze of originality. Their unique sound can be heard in their upcoming debut EP Redemption, where all the songs combine melodically driven guitar attacks with epic sing-a-long melodies, all held together with old school metalcore power.

The band are currently putting the finishing touches to their first official video which will be released in conjunction with Redemption in early 2017 on Sliptrick Records.