The Bristol (UK) based Metal Band Triaxis have introduced Angel Wolf-Black from Greece as new singer. Read the news and spread the word!

Triaxis are proud to reveal their new vocalist to be the incredible Greek musician and songwriter Angel Wolf-Black. Those with a keen interest in European metal will know Angel from her own solo work, or with bands such as ‘Seduce The Heaven’, ‘Bare Infinity’ featuring in ‘Vivaldi Metal Project’ or working with female metal vocalist community ‘Eve’s Apple’. Having recently moved from Greece to study music in Southampton, UK, this is a perfect time for Angel to bring her unique tones to mix with a typically British classic metal sound, forging something exciting for Triaxis fans old and new to enjoy. Angel comments:

Over the last couple of months I have loved learning and rehearsing the Triaxis material and I am so excited to perform it live! I hope that the fans will share in my excitement and enthusiasm for the future. We have already begun to write for our next release so they shouldn’t have long to wait!

Angel joins Glyn Williams and Matt Chambers (guitars), Becky Baldwin (Bass) and Gareth Arlett (drums), to work together rehearsing for upcoming shows and writing the band’s fourth album. Becky comments on the recent changes and the future of the band:

We are very happy to welcome Angel on board, it was pure good fortune that such a perfect fit for the band had just moved to England when we had started advertising for a singer. We would also like to thank the Triaxis vocalist of 10 years, Krissie Kirby, for all her work with the band. 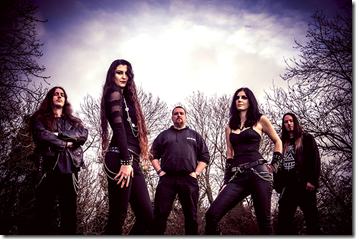 When she first spoke about leaving the band we were of course feeling low and uneasy. But now we are honoured to have Krissie’s blessing in continuing the band in it’s new chapter with Angel at the helm. There is still an exciting future ahead for Triaxis!

You can catch Angel Wolf-Black fronting Triaxis on tour this Spring, starting with a support slot on the 25th of February in Southampton, and a full headline performance in Birmingham on the 26th of February for Power Metal Quest Fest. (Get tickets from http://triaxis.bigcartel.com/ )

Gigs this spring include: